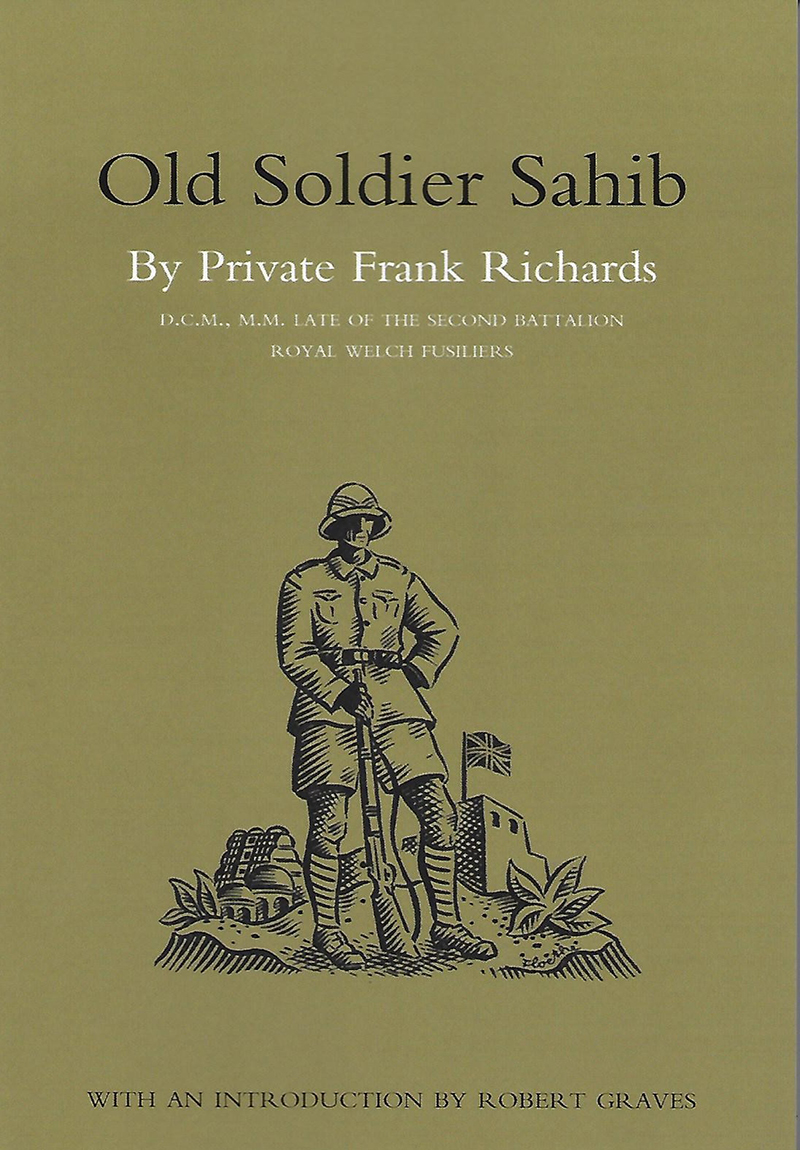 Frank Richards is well known for his Old Soldiers Never Die, probably the best account of the Great War as seen through the eyes of a private soldier. Richards served in the trenches from August 1914 to the end in the 2nd Battalion Royal Welch Fusiliers (RWF). Born in 1884 he enlisted in the RWF at Brecon in April 1901, just three months after the death of Queen Victoria. Brecon was the home of the South Wales Borderers (SWB) and the recruiting sergeant there did his best to persuade the new recruit to join the SWB (Rorke’s Drift and all that) but all in vain. What attracted Richards to the RWF was the fact that they had a battalion in China and another in S Africa, and they were the only regiment in the Army privileged to wear the flash – a smart bunch of five black ribbons sewn in a fan shape on the back of the tunic collar. This was a reminder of the days when soldiers wore their hair long, tied at the back in a queue or pig-tail.This is a marvellous book, full of nostalgia as it takes you back to the days of the Empire before the outbreak of the Great War, to that great little army that died on the Western front in 1914; it is in fact a prequel to Old Soldiers Never Die. Richards served in India and in Burma and his descriptions of the soldier’s life in those countries in those far off days and his anecdotes make wonderful reading. Kipling described east of Suez as ‘the place where there ain’t no ten commandments’. For the soldier the prime virtues were courage, honesty, loyalty to friends and a pride in the regiment. In his inimitable style Richards is down to earth though never having to use the four-letter language that is de rigueur today nor was the soldiers’ attitude to the natives very politically correct. As one of his fellow reservists said when they mobilised for war in August 1914: “There’s only one way to treat foreigners from Hong Kong to France, and that is to knock hell out of them.” Some of his yarns are for the broad minded – witness the ‘magnificently built’ prostitute who chose the date of the Delhi Durbar of 1903 to announce her forthcoming retirement. To celebrate the occasion and as an act of loyalty to the Crown she decided on her final appearance to make herself freely available to all soldiers between the hours of 6 p.m. and 11 p.m. with preference given to old customers; a notice to this effect was pinned on her door But life in the army wasn’t all bad; Richards served eight years with the colours, nearly all of them in India and Burma, and in those eight years he grew three inches in height and put on three stone in weight. As a reservist he was recalled to the Colours in August 1914 and in the war that followed he was awarded the DCM and MM. This is a superb book!.